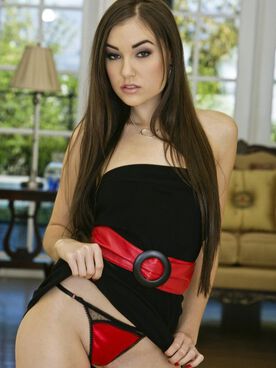 About me
Sasha Grey was born in 1988 in California. Though not a typical California girl, she is a stunning 5’6", 110-pound brunette. Her delightfully tiny tits are only 34B, but they are fabulously perky and puffy. A cultural connoisseur, Sasha took her first name from Sascha Konietzko of the band KMFDM, while her last name comes from Oscar Wilde’s "The Picture of Dorian Gray".

Sasha Grey has performed in over 300 adult films and even got into the director’s chair for a few of them. In 2008, Sasha’s prediction came true and she started her mainstream crossover. Sasha landed a role in the Superchrist music video by The Smashing Pumpkins, as well as in the video for the song Birthday Girl by The Roots. In 2010, she got her big mainstream break by landing a starring role in The Girlfriend Experience. The movie was about escorts and was perfect to show off her mainstream acting skills while blurring the lines between porn and Hollywood. Her hybrid career came full circle when she landed her role in HBO’s Entourage playing herself, and the rest is history!
Profile
Model nick Sasha Grey
Age 34
Relationship status no info
Joined 2 years ago
Country United States
Tattoo no
Piercing no
Language English
Sexual orientation Bisexual
Gender Female
Breast 1
Weight 50
Height 168
Hair color brunnete
Eye color other